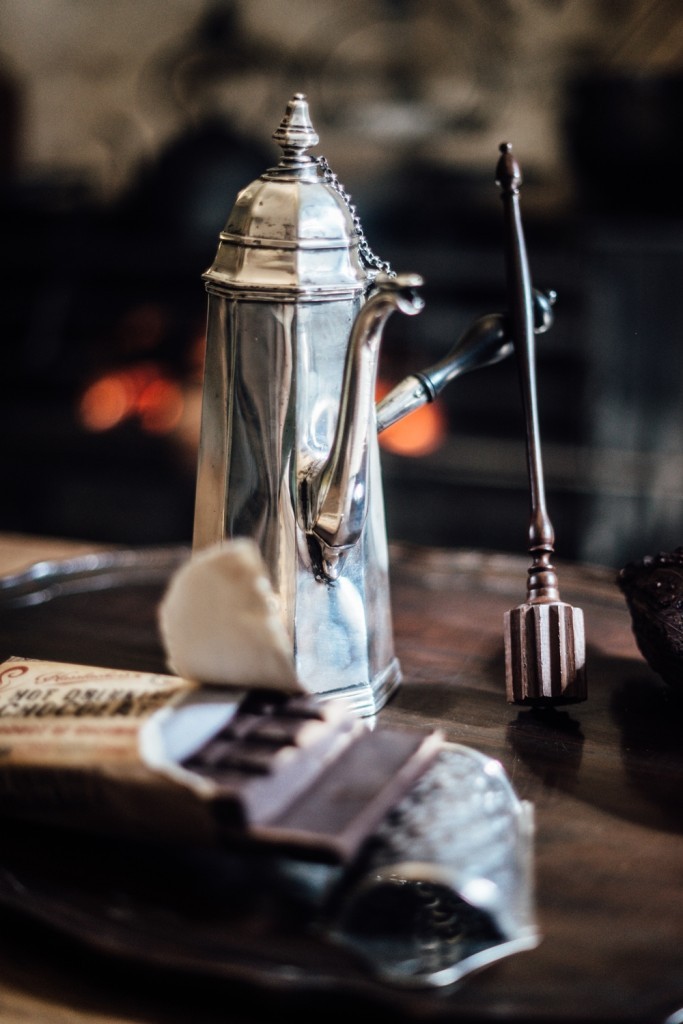 Hot Chocolate in the 18th Century

300 years ago, at the start of the Georgian period, the best quality chocolate from Latin America began to be imported to the fashionable cities of Bath, London and Paris. Chocolate houses became as common as coffee houses are today, but only the rich and aristocratic could afford 100% cacao chocolate , and drinking this luxury beverage became an indulgence of the elite.

The drink was adapted through the 1700s to suit a sweeter taste – with vanilla, cinnamon, nutmeg, milk and sugar, the ultimate sign of wealth.

Making hot chocolate was a longer and more complicated process than making coffee or tea. The beans were roasted, crushed, mixed into a paste with water and then exported as ‘nibs’ or as a solid block which could be grated.  The grated cocoa was then mixed with the liquid, boiled and frothed with a wooden ridged stick called a ‘molinet’ which was rolled between the hands until well mixed. Although slightly grittier than modern day drinking chocolate because it was impossible to grind by hand to a fine consistency, the resulting drink was nevertheless rich and delicious and became especially popular as a breakfast beverage, often with the addition of grated bread or egg yolks which transformed it into a meal in itself. Ladies might drink chocolate in their bedrooms while at their morning ‘toilette’.

The popularity of hot chocolate soon resulted in the production of fashionable, expensive tableware with which to prepare and drink it.  Chocolate pots had shorter spouts and lower handles than coffee pots and often had hinged finials to allow the molinet to be inserted. Two handled chocolate cups with their matching covers and saucers were distinctively different in style to tea or coffee cups and increasingly elegant designs were manufactured by leading porcelain factories such as Sevres in France or Worcester in England.

Chocolate was always taken as a drink in the 18th century; it was not until the 19th century that it was made into a sweetened bar which could be eaten as a food, but no matter how it has been enjoyed it has always been associated with luxury and indulgence.

We recently enjoyed being the venue for a photoshoot of Hasslacher’s © Hot Chocolate – the only 100% cocao chocolate imported into the UK from specialist growers of Criollo and Trinitario beans. The photographs were taken in the Withdrawing Room and Kitchen of No. 1 Royal Crescent, and can be seen on Instagram here.

Previous post Evening admission during the Bath Christmas Market Next post Can you provide any Christmas greenery for our displays?